I've seen lots of buzz about bullet journaling for quite awhile now. I mostly ignored what I saw because I thought the main gimmick with bullet journaling was using craft supplies, and fancy lettering, and complicated color-coded organization systems. None of that especially interested me, so I never read further.
I'm not sure what it was last week that made me decide to look into it further. I think it was an article I came across that was titled with something that indicated that bullet journaling could be done without doing any fancy decorations and could be adapted to whatever you needed it to be. Now that got me interested.
I keep a journal. I always think I will write in it every day, but I never do. I write in it when something exciting happens, or I'm upset, or stressed out, or worried about something. If you were to read my journal for the last couple of years you might think I did almost nothing but have surgery and doctor appointments, because that's the main thing that weighed on my emotions, and I most needed to work through and come to grips with in myself. So I journaled about it a lot.
My bullet journal is different, and after using it almost a week now, I don't think it will replace my regular journal, that's my therapy. What my bullet journal is is a brief log of what I did each day. The sorts of things I used to tell myself I would record in my regular journal, but I never did.
Then I continued to read about other uses of a bullet journal: to-do list, goal setting, lists, ideas, pretty much anything you want to include. That was my lightbulb moment. I keep a notebook with me almost all the time. I have notes about curriculum I want to research for my kids, about bills due, about topics for this blog, and the blog I wrote for work, short story and noveling ideas and research, interesting things I came across that I want to remember, and so many other things. My problem is I have several of these notebooks and so my notes are spread out all over the place and I often can't find the ones I want when i want them. So I tried to keep different things in different notebooks, thinking that would solve my problem, but it didn't. I'd have an idea for my novel when I had my homeschooling notebook with me, so it became a 'whatever' notebook almost immediately.
The bullet journal seems to be solving all these problems. I can keep all my notes about all the things I like to keep notes on, all in the same notebook because the index will tell me where everything I need is. And I can do it without spending the time trying to make it pretty or fancy, since that's not what I'm there for.
I just started with a small empty journal I already had around to see if I liked the system. Spoiler; so far I do. I want to have a journal that is small enough that I can carry it around with me the way I like. Still, something bigger than the one I'm using would probably work better. Mine is fairly messy, partly because it's so small I suspect. Maybe someday I'll be inspired to make it pretty, but I doubt it. I'm just happy to have a way to keep all my pretty ideas close. 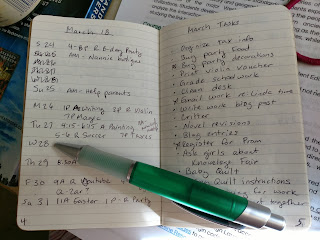 Posted by Kara Hartz No comments:

My novel revisions have been going a little slower than I'd hoped. However, that's probably I wanted a little guidance in revising and rewriting such a big project. So I've been reading:

both have been helpful, but reading is not editing, and that has added time. In the long run, not flailing about on my own, however will hopefully save time, and the ultimate goal is obviously to end up with a better book. So I think I'm getting there. Now that I've finished reading, and going the exercises and have a great list of specific things to tackle, the actual revisions are going well. The book is getting better. Should have it ready for my beta readers soon-ish. Heck, if you'd like to offer feedback or a critique, let me know and I'll send you a copy when it's ready for that phase.

I am also working on the paperback version of

I will probably also eventually work on a paperback version of
but it's so short I think that's why I didn't make a print version in the first place. But I'll go look at it again and see what can be done. As a reader, I like options. I'd like my work available to people however they best like to read.

I'm excited, and nervous about the whole process, and that's what makes it fun. Well, the writing and the creations is what makes it fun, the publishing makes it stressful, but that's life.
Posted by Kara Hartz No comments: 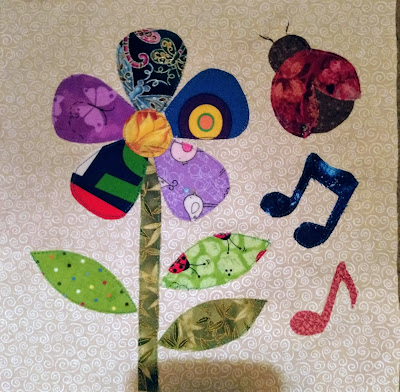 I've been trying to tidy and organize while out recovering from surgery. Not easy to do without bending or lifting anything, so it isn't really going all that well. But I did find a bunch of fabric scraps all over the place, and put them all together. I've read quilting blogs that seem to consider a fat quarter, or even bigger pieces of fabric a 'scrap', but to me a scrap is a few inches at best. Something left over from another project, not big enough to do much with.

I decided I should come up with something fun to do with some of the scraps. I thought, since I haven't done any applique in a long time, that would be fun. Poking around the internet, I found a free pattern for the above flower here:
http://www.craftpassion.com/flower-applique-pattern/

It was cute, it was scrappy, and I could adapt it to a little block that I could make in a short amount of time. Winner! If you follow the link you will see there is also a bird pattern that I had intended to use, but the scraps I picked turned out not to have good contrast with each other or the background, so it didn't look good, and as you can see from my finished block, there really wouldn't have been room anyway. I still liked the musical notes, even without the bird to sing them, so I left them in anyway. I can do that because I'm a grown up.
Posted by Kara Hartz No comments: