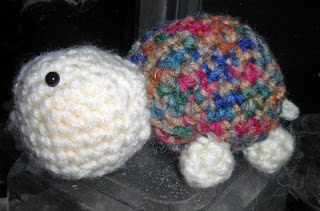 My sister recently introduced me to Raverly. It's a social networking site for knitters and crocheters. My sister knits, and I crochet. Well, I used to, but it's one of my hobbies that has been far on the back burners in the past few years.

Then I went to a amigurumi workshop and it was so much easier and more fun than I expected, I've been sneaking little bits of crochet into my life again. My first completed project is Ted the Turtle. It's a free crochet pattern I found on Raverly, by KristiKids.

I thought my kids would like the little turtle more than they did, but he was still fun to make. The baby likes him the most, but I only let her play with him while I'm watching because I don't think I put his eyes on very strong. I'll probably sew on yarn eyes on future projects.

I know I'll never list my crochet projects in my Etsy shop, but it's almost neater to keep this as just a hobby I do for me. No pressure to make anything at any special time. Not that I really pressure myself much for my Etsy shop either, as you can probably tell by how infrequently I list new stuff.

In that same line of thinking, I have a cool idea for a wall quilt I want to make for my daughter. If it turns out like the picture in my head, I'll try to make a pattern and post it here. I'll have to practice foundation paper piecing, something I haven't done much of, but that's another reason it'll be fun.

I think that's a big reason the crochet projects have been such hoot. It's learning something new, a little bit of a challenge, but not an overwhelming one. Plus I love amigurui. I see cute ones on Etsy all the time, and want to buy them, but then see that they're only patterns, not finished dolls. I passed them by because I didn't think I was a skilled enough crocheter to pull the patterns off. Now I'm a little more confident, and may give some a try.

If you like to knit or crochet though, you should definitely give Raverly a look. They have a ton of patterns listed, many, like the tiny crochet turtle, are even offered for free. Heck, even if you've just wanted to try knitting or crochet one day, go for it right now! Learning a new craft is always a good idea!
Posted by Kara Hartz

The turtle is cute! My sister has a turtle.
Rae Byuel
http://learncrochet.blogspot.com

Your turtle crochet Ted is beautiful, I will check out that free pattern in Raverly too.