Peanut Butter and Pickles and Squirrels

We went camping (in a cabin with a bathroom, so not too rough) last weekend. After lunch one day we left our jar of peanut butter out on the table. I didn't think about it since some other members or our group were still eating when I left to take a kiddo to the potty, and everyone was leaving when we came out, I didn't think to check if they cleaned up (I'm a trusting soul that way).

So everyone knows what happens to food left out at a campsite, right? But since I thought it was packed away, I didn't look for it later.

Fast forward to the following morning.

The kids were playing with a ball that fell down into a small ravine that ran next to our picnic tables. Auntie bravely trekked down the slope to retrieve the ball, and said, "Hey Kara, your peanut butter is down here!" So I climbed down there too. We'd seen squirrels watching us during mealtimes from the ravine, and from the looks of the jar I got back, that's who made off with the peanut butter. Which is pretty impressive since the jar probably weighed as much as the squirrel.

Looks like they were frustrated by the jar though, and eventually gave up. There were a couple of small scratches on the bottom of the jar, but nothing like what you see here on the lid. That makes me wonder - were these squirrels (who live at a campsite and are no strangers to human food containers) familiar enough with peanut butter jars to know that they could get in through the lid, or did the lid end just smell better? Because it occurs to me that if they chewed at the bottom as much as they chewed at the lid, they probably could have made it through the much thinner plastic on that part of the jar. But they didn't. Silly squirrels. 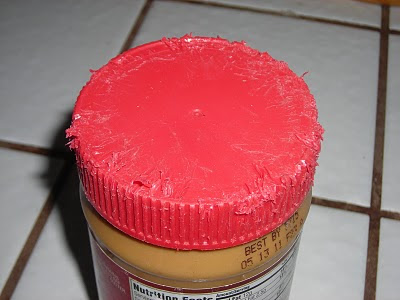 Oh, and the pickles. . . Well, Grandma made a comment (when she went into the ravine after the ball on a separate occasion) about all the weed prickles that got stuck in her socks. There were all sorts of burs, spores, and foxtails down there. My littlest spent some time thereafter concerned about getting pickles (that's how she said it) in her own socks, and had to examine everyone's feet frequently in constant worry, lest the pickles attack someone else. Gotta watch out for those darn pickles.
Posted by Kara Hartz 4 comments:

What I'm Up To

So I keep thinking about ideas for blog posts that I never actually write. Trying to remedy that little problem and get into a better schedule. To begin with I'm just going to do a little roundup of where I'm at on my various projects I've talked about on the bog so far.

* I haven't done anything more with the remaining silk from our silkworms. I didn't have enough of it done in time for the county fair, and I'm still undecided about what exactly I want to do with it. I ended up with maybe half a dozen or so cocoons that never hatched, so I want to try reeling those in the more traditional way, but probably not right away. Have a lot of other stuff on my plate right now.

* I finished an approximately 7000 word short story, and am in the process of editing it. I'm excited because it's the first fiction project I've finished that's more than 100 words in a really, REALLY long time. Yea!

* After our trip earlier in the summer, I never got back into working on The Artist's Way. I've done a little journaling, but really, I should try to do that more regularly too. Or maybe not since I used what used to be journaling time for working on my story. Humm. . .

* I'm inspired by my the blog of my favorite amigurumi designer (If you either don't know what that is or don't have a favorite, go look - all kinds of cuteness and fun.) I'm going to start sharing a little of my fitness journey. Don't worry, I'm thinking just once a month saying a little something about how my exercise and weight are doing. Hopefully this will keep me paying attention (I'm distractable if you couldn't tell.) Also by keeping it to only once a month I want to avoid obsessively weighing several times a day and the kind of OCD crap I'm prone to. Generally I have a tendency to all sorts of unhealthy habits on both ends of the dieting/exercising spectrum when I think no one will notice. Maybe if I pretend people are watching, I can keep myself more moderate and honest.

* The self-led writing class is plodding along. Mostly reading so far, although I did join the Internet Writing Workshop; I haven't really participated yet. The format isn't instinctual to me, and there's a lot of messages to get through, so that's a learning curve. I need to give myself an assignment I think.

* I've gotten the nicest and most encouraging rejections for two flash fiction pieces I sent out awhile back and I was torn about reworking them (as the editors encouraged me to do) or just send to other markets. So they've just been sitting here. I think I've decided on sending them out for another round. I just can't think of anything more to do with them. They say all I'm really interested in saying, and I think if I try to expand they'll just ramble. If they don't find a home soon, you'll see them here!

* I'm making an I-spy quilt for my littlest. Seems kinda a shame to make a simple square quilt with my snazy new machine, but I have a plan for a little wall hanging that maybe I can get fancy on next.

Now, time to do dishes.
Posted by Kara Hartz 4 comments: