And Then There Were Two: Silkworms, Day 51 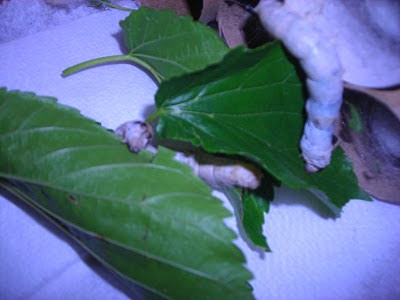 When the silkworm eggs started hatching, they all hatched together. Within 24 hours of each other anyway. I'd made the mistaken assumption that they would all spin their cocoons at about the same time as well. The first spinners started on May 12th, at 38 days old. Four started spinning that morning, by the time I went to bed, about 12 or so were working away at their cocoons. And now, 13 days later, 2 are sill hanging around. Kinda eating, kinda sitting. I'm a little worried about them really. I don't know if they're not eating much because there s something wrong with them, or if it's because there are only 2 of them, so it just seems like they aren't eating much (compared to trying to feed 180 caterpillars a few weeks ago.) Either way, I think they're in trouble. They're either unwell, or just fine, but still going to spin and thus emerge from their cocoons two weeks after most of their buddies. Not good for their mating prospects methinks. Then again, if the emerge the way they spun, then a few new ones should come along each day. Maybe it won't be so bad for them after all. Time will tell.

I worry I may have made another mistake as well. To make more spinning space, I removed some cocoons as they looked finished and put them into a box. I'd seen pictures of cocoons collected like this, so thought it was fine to do. Then as I thought about it, most of these places also kill the larva inside. I'm not going to do that. I hope disturbing and moving the cocoons won't have any ill affects to their metamorphosis and ability to emerge. Again, I suppose time will tell. 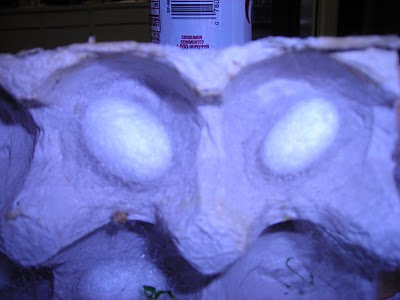 I'd also read that if the caterpillars were too small they would be unable to spin at all, and would just turn brown and die. Thankfully, our smaller silkworms just spun smaller cocoons. Cute, huh?
Posted by Kara Hartz

You are going to have a LOT of moths. LOL